Author of the illustration: Carl Chun

The name of this particular squid is very different, as is the overall appearance of it. The black color is distinct enough in itself. The fact that the long arms flow like a black cape remind many people of a vampire wearing one. The arms have suckers that are hard to see unless you look up close at one.

This is a small squid, approximately one foot in length. The eyes are very often seen as red. They can also appear to be blue though depending on how much light is available when you see one.

The tend to be living in the tropical waters that are warmer for them to move around in. They also live in the depths of the water where their dark color helps to serve as camouflage for them to avoid predators. Generally they will live in water that is no more than 45 degrees Fahrenheit. 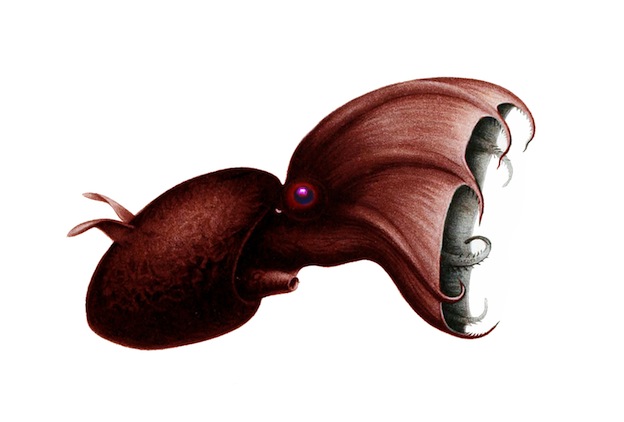 One of the most unique behaviors of the Vampire Squid is that they seem to be flying through the water. Such movements are the result of how they flap their fins to move around. They have the ability to slow down their metabolism to a very low rate. This is how they are able to live in the very cold waters.

It doesn’t have ink to shoot out when it feels it is being threatened. Instead this type of squid offers a type of mucus that shoots out. The mucus is sticky and it can continue to come out for up to ten minutes. It allows the squid to hide from predators as they aren’t very fast swimmers.

The jaws of the Vampire Squid are extremely powerful. However, researchers aren’t fully sure of what all this type of squid consumes. Some theories include a variety of small invertebrates. They don’t need to eat very much though due to their low metabolism. It is believed that it only has to feed a few times per week. This is key to their survival too since it can be difficult at times to find enough food.

It is believed that the Vampire Squid reproduce by the males depositing sperm into the sac of the female. She will deposit fewer eggs than other species and they are also larger in size. The females may store the sperm though for several weeks before they allow it to fertilize the eggs. She will stay in the general area of these deposited eggs until they are ready to hatch. This can take about 13 months.

The females will die soon after their offspring are born. They don’t need to feed for the first few weeks of life. Instead they have an internal type of yolk that they are able to get nutritional value from.

Many people are interested in protecting the Vampire Squid due to the unique design of it. They also know too many people have a false conception of it due to the look of it. Those that know better try to educate others so that the false information is less likely to continue spreading.

The Vampire Squid was first identified in 1903. However, it was misclassified as an octopus at that time. Contrary to popular myths this type of squid doesn’t pose any threat at all to humans. Those stories likely developed based on the appearance of this species.

Due to the fact that they live more than 3,000 feet below the surface of cold water areas, not much is known about human interactions with them. Most of the time it is either calculated research or a fishermen accidentally captures one.