There are more than 300 known species of squid out there that have been identified. They fall into one of two categories – myopsida and oegopsida. Those that belong to the myopsida group reside in the waters that are very shallow. They also have suckers on their tentacles. The oegopsida squid species live in deeper water regions. They have hooks on the ends of their tentacles. There are some very common types of squid out there for you to learn about.

The California market squid is one that is frequently sold for food sources including calamari. They are mainly found in the bay of Monterey. Along the coast of Florida and the Caribbean you will find the Caribbean Reef squid. They look very similar to fish in regards to the design of their body but they also have arms and fins.

The most aggressive species of squid is the Humboldt which is found in the Eastern part of the Pacific Ocean. They are very long and be up to 100 pounds. They will even attack sharks that are found in the waters. Compared to the smallest species that are less than one inch in length, this is quite a significant difference.

Don’t base the aggressive nature of a squid on appearance alone though. The one that looks the meanest is the vampire squid. It features a black body with red eyes, and the arms create a flowing look similar to a vampire cape. They don’t move around in the water much though. Instead the patiently sit and wait for their prey to come to them.

The Boston squid has some features that are different from the rest of the species. Both the pen and the fins are much longer than those of other types of squid. It is also very small and has a thin body. The Boston squid is often referred to as the winter squid as well. The summer squid is generally found around New Jersey. It features very short fins and a mantle that is thicker.

The Humboldt Squid is often referred to as a jumbo squid due to the size of it. They are much larger in size than many others. This is why they are often used for human consumption. This species is able to live in the deep waters and they tend to live in groups of about 1,000. This is rare for squid as most of them live alone. 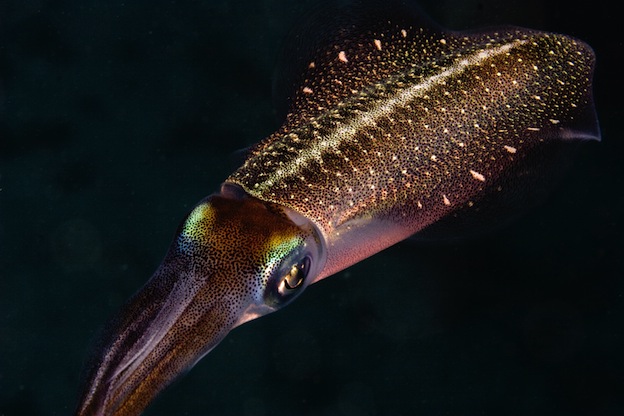 Colossal squid are fascinating to many people due to their color and their size. The tentacles of this species have small teeth along them as well as hooks that are extremely sharp on the ends. It features a body that is very wide compared with other species. This is the largest of all squid in the world.

There are many researchers out there including Steve O’Shea who have dedicated their time and efforts to learning all they can about squid species. Their observations and pictures have helped us to understand more about them. It has also encouraged people to see them as part of the aquatic life out there in a new light. It has even helped to dispel rumors of them being destructive creatures.

It is believed by top researchers that there are many more species of squid out there than they have been able to identify thus far. Hopefully with the continued developments relating to technology more of them will one day be known to us. Some researchers estimate that there are at least 200 unknown species of squid out there at this time. They continue to try to collect information on them.