What do Squids Eat?

While it is common knowledge that the squid often becomes a source of food for other creatures, they also need to find food for their own survival. They hunt on their own and they are meat eaters. They actually consume a great deal of food too, even those that are small in size.

Their common foods to feed on include various types of small fish, crabs, and shrimp. They have been known to feed on other squid that are smaller than them too. This generally only will occur though when other sources of food are scarce.

The squid features a small beak like mouth. They are able to kill their prey with it as well as then shred it into smaller piece that it can consume. In order to capture their prey they use their tentacles. They have rings on the ends that are very sharp as well as create a tight grip using suction.

To capture their prey, squid quietly stalk it in the water. Then they reach out and grab it tightly. The prey is torn apart and consumed while it is still alive. The tongue is very sharp, like a grinder, and then the food is moved down the throat region to the stomach. From there it moves to the liver where it is absorbed for energy and for growth.

Even the smaller species of squid are extremely strong and powerful. Therefore they are able to keep their prey without allowing it to escape. The suction and the hook mechanisms found on the tentacles give them the ability to have a force that is difficult for other creatures in the water to escape from.

When a squid is able to get enough food it will grow very rapidly. The failure to get enough food though will result in it being weak and unable to survive in the harsh living conditions. This is why you will often find plenty of squid in a location where they can easily get the sources of food they need. 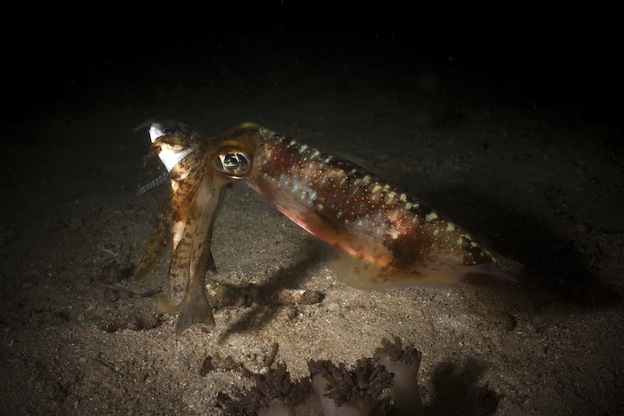 The offspring fend for themselves from the moment that they are born. They will feed off of plankton until they are old enough to consume the above mentioned types of prey. If you aren’t familiar, plankton includes a variety of organisms that float on the water. They include bacteria, plants, and small animals. These young offspring are very opportunistic so they will consume what they can in order to survive.

However, sometimes these types of plankton contain parasites and other materials that aren’t healthy for the squid. This can result in them not developing properly or even dying. Young squid can also feed on items that humans have polluted their waters with. These aren’t healthy for them either. This is why it is important for all of us to make sure we aren’t contributing to such problems.

What squid will consume often depends on the time of year. Many of the foods they consume are seasonal so what they eat changes during various times of the year. What they consume will also depend on the region where they are located. This is because not all types of food sources are found in all areas. They are very intelligent creatures so they can be creative when it comes to capturing what food is readily available.

Squid are very adaptable though so they will find things to consume when they need to. They are going to consume any type of meat in the water, even if it is other squid when their normal sources have been depleted. This is a way for them to continue to evolve and to survive.